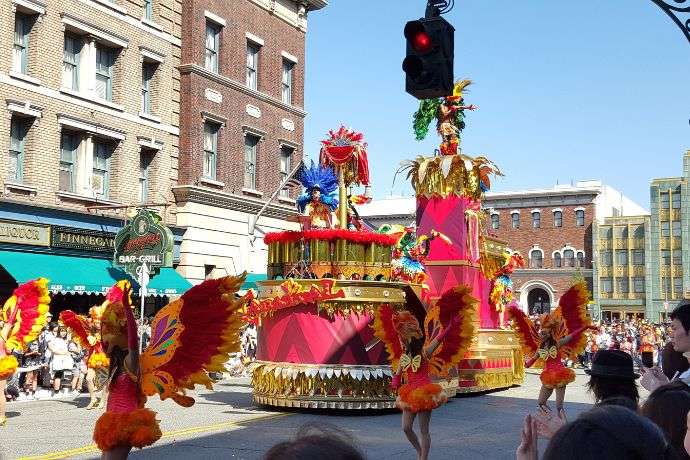 In addition to the rides, there are plenty of theatre shows, stage shows and street entertainment to enjoy. There are also a number of opportunities for character greetings. Over time, we have watched quite a lot of theatre and stage shows including Backdraft, Terminator 2: 3D, Waterworld, Shrek’s 4D Adventure as well as a number of street shows and parades.

Unfortunately, this time we didn’t have the time to watch Sing on Tour and had to leave before the Universal Spectacle Night Parade.

Backdraft is a fire special effect show which you can now only watch at Universal Studios Japan.

In the first section of the show Ron Howard, the director of the movie Backdraft, talked about the making of Backdraft. Unfortunately, the video was dubbed into Japanese without subtitles. In the next stage of the show, we learnt how the pyrotechnics were made and experienced fires and explosions first hand.

Terminator 2 is yet another old-school Universal Studios experience that you will only see in Japan. Terminator 2 debuted at USJ in 2001 and is still going strong 18 years later. While parts of the show now feel a little dated it’s still action-packed and immersive. The videos and presentations are in Japanese but it’s easy to get the idea of what’s happening.

The show was set after the movie Terminator 2 finished. John and Sarah Connor, played by live actors, rushed on to the stage, pursued by a T-1000 Terminator (the liquid metal Terminator from Terminator 2). A T-800 Terminator (AKA Arnie) then burst through the screen to take John back to the future, closely followed by the T-1000 terminator. After overcoming the T-1000, John and Arnie breached Skynet where they battled an upgraded version of the T-100 Terminator shaped like a massive liquid-metal spider. Arnie then sent John back to the present before the show ended with the destruction of Skynet.

For an 18-year-old show, the 3D effects are still fantastic. The 3D footage in the show is presented on three massive wrap-around screens which make you feel part of the experience like when the liquid metal spider oozes straight towards you. Another fantastic feature is how the live-action sequences merge seamlessly with the 3D video. One great example of this is when the T-800 terminator on his motorcycle comes flying towards the audience and then bursts out of the screen on to the stage.

If you have never watched this show before and have even a passing interest in the Terminator movies, check out Terminator 2: 3D while it is still around.

The Waterworld show is based on the 1995 movie of the same name starring Kevin Costner. The movie was a very expensive ‘flop’ but the show itself is fantastic. Like Terminator 2, the events in the show take place after the movie. The story revolves around an attack by the Smokers (the bad guys) on the base of the Atollers. There were plenty of battles throughout the show. The good guys emerged victorious and then escaped before the whole base exploded.

The show features a tremendous amount of action. There was a constant succession of stunts on both land and water as well as in the sky. There were heaps of special effects including explosions, fire and water effects. We all loved the dramatic crash landing of the seaplane near the end.

If you are looking for a show with an overload of action make sure you watch Waterworld. As a little tip, if you visit Universal Studios Japan on a hot day, position yourself in the Soak Zone (the first five rows). Our children sat in the Soak Zone and managed to stay dry but plenty of other people got quite wet.

Sing on Tour is a 20-minute show which follows on from Sing the Movie. The storyline begins at the Japanese premiere of Sing on Tour and is led by the lovable show director, Buster Moon the koala. The stars of Sing perform hit songs from the movie and audience members get to sing and dance along. The show includes leading-edge animatronics, lighting and a huge LED screen.

Prepare to be entertained by the singing and dancing performances of Beetlejuice and his friends.

Shrek and Donkey were much-loved movie characters when our children were younger. Therefore, we made sure not to pass up a chance to watch a new short Shrek movie in 4D. Our children are now aged between 10 and 14 and still very much enjoyed the experience. The movie only goes for about 25 minutes but is full of fun. As with Waterworld, we also watched Shrek 4D Adventure at Universal Studios Singapore but the photo is from USJ.

The movie is set after Shrek and Princess Fiona have married. Lord Farquaad has died but that doesn’t stop him as he makes his henchman Thelonious kidnap Princess Fiona. He plans to make Princess Fiona his queen so they can rule together over his ghostly realm so Shrek and Donkey must save the day.

I would definitely recommend watching Shrek’s 4D adventure particularly if you have pre-school or elementary-school children.

We didn’t watch Sesame Street 4D Movie Magic but I’m sure it would be equally as enjoyable as Shrek but would be most appropriate for pre-school or young elementary school children.

Our family were really disappointed that we had to miss out on the latest USJ night parade on our most recent visit to USJ. Unfortunately, we had to leave by mid-afternoon to get to Imabari that evening. We had enjoyed a day-time parade on our previous visit to Universal Studios Japan but have not yet seen a night parade.

It would have been great fun to experience the world of Harry Potter, see the world’s first transforming float from the Transformers universe, encounter some Jurassic World dinosaurs, and experience the chaos of some Minion Mayhem. Apparently the projection mappings used on buildings during the parade are also fantastic.

Here are some photos of the day parade from our first visit to USJ.

Disclaimer:  This article contains affiliate links.  If you book after clicking on one of these links then we may receive a small commission at no extra cost to you.